When teaching or playing with people new to the sport and they see me execute a roller shot for a long, accurate drive, it’s only a matter of time before they ask if I can show them how to do it.

They have correctly deduced that, quite often, a disc can travel farther rolling along the ground than spinning through the air. Actually, if the terrain and conditions are suited for the purpose — and the roller is thrown by someone who knows the right way to do it — it usually is the case. It’s pretty enticing for someone who is having a hard time getting the kind of distance he or she sees everyone else is getting.

Some people avoid the roller as a violation of an important aesthetic element of disc sports. After all, it’s supposed to float through the air. To that, I say geo over it.

At one point, I was in the camp myself. Then I realized I was a person who loved the competitive golf aspect of disc golf. I was jealous that others who could execute rollers had an advantage over me. So, I began to figure out a different world of getting discs from point A to point B.

In fact, roller shots are not as inelegant as they first appear. The same science of selecting the right combination of release angle, arm speed from an air shot applies to rollers as well.

From the time I started to now, I’ve learned a lot. The following is a journalist’s tried and true who, what, when, where and why for rollers. The how will follow in part two of this series.

Those who throw rollers tend to be part of one or two groups — or both. Some are players who love the sport and regularly play, but for physical reasons can’t get much distance through the air. Age is often a factor, as players of the Baby Boomer age often find their bodies won’t generate the arm speed and whip action needed for longer distances.

The second group includes players who insist on mastering every possible way to throw a disc further or past obstacles that block high-flying hyzers and anhyzers. Those obsessed enough with the game to incessantly experiment will eventually discover the roller, either intentionally or accidentally.

A roller is a throwing technique where the disc rolls along the ground rather than flying through the wait.

However, it’s not always quite so cut-and-dry.

Depending on the situation, some roller shots don’t hit the ground and start rolling until more than halfway to the total distance covered. As far as technique is concerned, rollers are really just backhand or forehand throws with modified angles or release so the disc will hit the ground mid-flight at an angle causing the disc to roll on its edge rather than stop, slide or skip. 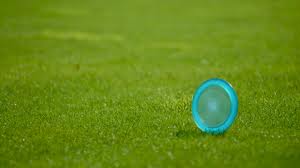 A roller in mid-roll. (contributed photo)

Another thing about rollers to keep in mind is the rate-of-rotation has an effect on the path the disc travels, just as much as air shots. Maybe more. A shot through the air will have the highest spin rate just after being released and, toward the end, the spin will slow down and usually cause the disc to fade. A roller can have this effect, too. I’ll expand more on this in the next installment.

This is covered just as much in the who and where sections.

When you need a little extra distance and an air shot doesn’t quite get you there, the roller might bridge the gap. When there is a stand of tall trees with low-hanging limbs between you and the basket, a roller can zip past those tree trunks and under the limbs.

It’s also important to know when not to use the shot. The one thing to remember is wind can greatly have an effect on rollers. Since the disc is vertical most of the time, the wind can push it around more. Picture a sailboat in a strong storm. Don’t think you can’t throw rollers when it’s windy. Just be aware that wind can make a big difference in the result. Sometimes it’s good, sometimes bad.

Roller shots work best hard and smooth terrain. Mowed grassy fairways that are not too bumpy usually produce good rollers. Hard-packed dirt is better. Obviously, it’s better if the ground is free of bushes and debris. Players will often throw the shot and hope for the best when there are rocks and roots to be navigated. Small obstacles on the ground can cause discs to hop over and it can be redirected quite far from its intended goal. That risk isn’t something usually encountered with shots traveling through the air.

This would not be an ideal place to throw a roller. (photo by Jack Trageser)

When using rollers to get past a stand of trees, it’s good to remember you’ll be rolling past the bottoms of trees and not dealing with any part of the trees that are higher than six inches or so (once the disc is rolling). Combine that with the disc being mostly vertical and you present less opportunity to hit something, which gives you a better chance for a successful roller.

One more thing — as you experiment with rollers, you’ll learn that a certain amount of space is required. It’s generally tough to pull the shot off in a place where you need to hit a small gap in front of you. The disc usually needs to travel a bit before hitting the ground, and getting it to land at the correct angle often requires some side-to-side space. The only way to know your limitations is through experimentation and practice.

Why (and why not)

As a recap, the reasons to throw rollers are the potential for more distance than other techniques, and the ability to get past obstacles that block all options through the air. Rollers aren’t just useful off the tee — they can be lifesavers as rescue shots where you need to get under obstacles, have a lie that restricts your throwing motion, or need to get around tight corners.

There are also plenty of reasons why you shouldn’t throw a roller.

As mentioned earlier, some terrain is not conducive to rollers. No matter how much the shot otherwise calls for a roller, if the ground is full of rocks or gnarly brush, you’re more likely to get a hopper-and-stopper.

Remember to keep in mind that rollers gone awry can get far off its intended route. The flip side is the extra distance rollers can provide. For this reason, you shouldn’t attempt rollers in a round you would care about until you can throw them with confidence.

Finally, remember rollers will usually require more lateral space and, often, more clearance. You’ll only know when you’re in a place where your own roller won’t work through trial-and-error. It’s best to experiment when there’s nothing on the line.

Coming next week: The mechanics of different rollers.

Jack Trageser is the founder of School of Disc Golf and the instructional writer at RattlingChains.com. You can reach him at jack@rattlingchains.com.

0 thoughts on “The five Ws of roller shots”