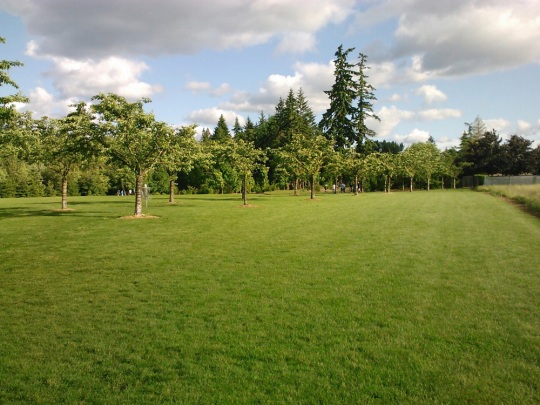 Don’t be fooled by this open-looking hole — this stand of trees on hole three can make for a much more challenging shot than you think.

(Editor’s note: While course reviews aren’t our top stories at Rattling Chains, we will, at times, run one when one of our writers has the urge to talk about a course they play or have played. This is one of those times).

My local course — Orchard Park in Hillsboro, Ore., is often much maligned by seasoned disc golfers for two main reasons.

The first is the abundance of recreational players, which makes the course quite crowded. The second is a complaint that, with its short pin placements and open greens, Orchard Park provides little challenge to an experienced player.

The popularity of the sport as well as the course’s central location and greens that are not quite intimidating make it a natural choice for the curious and acquainted alike.

I don’t begrudge the newcomers. Besides, many more recreational players have caught on to the basic etiquette of the game and will often offer to allow me to play through as soon as they see me tromping up to the tee pad.

In spite of its shortcomings, Orchard is a favorite haunt of mine, and not just because I live a stone’s throw away from it. Still, location is a big factor. As pretty much the only public course in my immediate neighborhood, Orchard makes getting my fix for disc golf a matter of a quick drive or bike ride.

Though Orchard only has nine holes, I find this to be perfect for a couple of reasons. First, I would often find myself at Orchard on a lunch break or before running off to tackle the day’s errands. Being able to blast through a quick nine in 20-30 minutes is a big selling point for me.

On days where I have more time, the circuit design at Orchard Park makes playing multiple rounds smooth and easy. This may sound silly, but when I consider that the other area nine-hole course, Greenway, just ends at hole nine and forces me to walk all the way back to the first hole if I want to play a second round. Suddenly this becomes a huge selling point in Orchard’s favor.

This still leaves Orchard’s perceived lack of challenge to overcome. The fact is, Orchard is a short course, boasting only two holes with a distance of 300 feet. The majority of the holes are 250-feet or shorter and there is little in the way of obstacles. These short, relatively wide-open greens challenge neither my technical game nor my driving game. There’s no denying it.

That said, playing Orchard Park with such regularity has improved my game in a lot of ways. First and foremost, my short game has benefited a great deal. While my drive is important, being able to recover from a poor shot often has a larger impact on my scorecard. This is where Orchard shines.

The open greens make it a great deal easier for me to focus on gauging distances, improving my depth perception and my ability to determine how much angle, snap and power I want to put into my shot, without having to worry about gaps and obstacles. Having these core mechanics drilled into me by countless rounds at Orchard has resulted in an overall improvement in my putt-and-approach game on more technical courses.

Another benefit of Orchard’s wide open greens is that it becomes a great way to see what a disc is truly going to do for you when you’re actually shooting for a basket. While I usually throw an open field near my home for this purpose, it’s not as relevant when you aren’t aiming for anything. I find that I get a lot more usable data if I’m shooting at a target that demands a specific behavior from my disc.

For instance, in my efforts to work on my anhyzer shots, Orchard’s eighth and ninth holes, with their mandatory doglegs, give me a chance to focus solely on the mechanics of the technique.

Orchard has also taught me a lot about wind and how it can affect the flight of my disc.

A gaggle of golfers piles up to tee off on Orchard’s second hole.

Its open greens invite gusts that shift direction without warning. While wind is a factor at any course I have played, it never seems so fickle as it does at Orchard. Being able to adjust and compensate for wind is an important skill to master, and reading articles on the subject just isn’t quite as effective as visiting Orchard in the late afternoon and watching your disc get buffeted about the course.

Lastly, Orchard’s chief weakness is also one of its strengths.

The short holes have had me retiring my drivers for the most part. Relying almost exclusively on my arsenal of mid-ranges and putters, Orchard has instilled in me a great deal of insight into that delicate ratio that exists between finesse and power that disc golf demands. It reminds me that the key to a good shot is about so much more than just how much torque you can put behind it.

In fact, since moving away from using drivers, I’ve actually been able to get 250-foot shots out of a few of my putters and have seen points shaved from my scorecard as I land more accurate shots..

I’ll admit Orchard Park is not the best disc golf course out there.

Its location is a double-edged sword. Its convenience makes it easy to access while also attracting a larger crowd. There is little one can do about that other than cope with the sport’s growing pains.

As for the contention that Orchard offers little in the way of challenge, I have to disagree. I can honestly say that I leave every round at Orchard having learned at least one new thing. Sometimes it might be something small, but I have had some breakthroughs as well. And for that, I owe my local course a great deal.

Andre Fredrick is an Oregon-based disc golfer writing for RattlingChains.com. E-mail him at andre [at] rattlingchains.com.