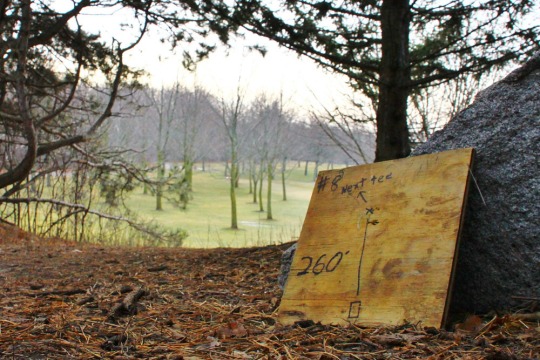 It doesn’t matter what kind of sign it is — as long as there are signs to help people navigate their way around courses. (photo by Jenny Cook)

Navigation issues on the disc golf course: How would you rate your home course?

Navigating a disc golf should not be difficult.

I once drove 400 miles eager to play legitimate par 4s and hole-shaping shots to test my game. After the first few holes at this course, my mood suddenly changed when I began struggling to navigate my way around the course.

If the obvious natural paths cutting through the trees and worn-down grass past the basket take me where I need to go next, then I’m a happy camper and no signage is needed.

Signs attached to the bottom of baskets can be extremely helpful. (photo by Jenny Cook)

For times when I look past the basket to five different and equally worn-down trails, with no indication of which one to take, I’ll use common sense of course flow to make my decision.

But I don’t always get it right on the first try, which means I’m obligated to try each one until I find the next hole. One or two holes of this out of 18 is not a bad ratio. It’s when the number of times I experience this increases throughout my round that I become frustrated — especially if the paths lead you to several different unmarked holes.

Now it’s time for technology — if you have a phone signal, that is. I pull up DGCoursereview.com on my phone to compare the hole I thought I should be on to the photos on the website.

But I was playing in the summer and I had to imagine no leaves on the trees and no snow on the ground, as compared to what the photos portrayed.

This almost made things more difficult.

All I wanted was a confirmation that I’m on the right hole and that I chose wisely to ensure I played the entire course the way it’s intended to be played. Unfortunately, technology can sometimes fail and so does the option of asking a local when I’m the only one out there playing.

Signs behind baskets pointing your way to the next tee can make it easy for people to navigate the course. (photo by Jenny Cook)

When playing an unfamiliar course, the last thing I want to happen is getting lost. The disc golf community is full of open-minded, kind and helpful people. It’s not so much you guys I’m worried about — it’s the wanderers in the woods with bad intentions and the minority of disc golfers with other intentions.

I realize the best solution is to remove myself from the situation. The next best thing — constantly be aware of my surroundings. Sometimes it doesn’t take much to stroll along the wrong path and end up far away from the course.

I do keep my self-defense class in my mind and mace in my bag, just in case. At the very least, it helps serve as protection against humans, as well as any threatening animals I might encounter.

Although the recent theft of a man’s disc golf bag while playing a local course of mine was an isolated incident, it serves as a constant reminder that we’re not always alone in the woods. Practice safe golf and follow posted signage, if there is any.

After installation, a course will go through many different stages of life. Often, the posting of signs take a back seat.

For locals of a new course, especially those who helped with the implementation of the design, navigating their way around a newly piece of land becomes second nature. It’s like your own back yard. It can be difficult to remain objective and imagine what an out-of-town golfer sees in your new creation.

I recently played at Foundation Park DG Complex – Champ 18 in Centralia, Ill. Signage was abundant at this course. For example, a solid black arrow on a plain white disc nailed to a tree by the basket. Maps were an option to take at the first hole, but on that particular day I was there, it was raining so hard that my map was wet, which made it difficult to use.

Simple or not, any sign is helpful. (photo by Jenny Cook)

Centralia has a fantastic course. I was grateful for signs and would give it a 10, not only because it was easy to navigate, but because of the aesthetics, true par 4s and the beautiful terrain.

I take it seriously when word of mouth tells me that a particular needs a guide, even if I’m playing with a group of people. I can’t help that I am attracted to those types of course as they intrigue me.

At the end of the day, at least the proper expectations have been made. It’s just too bad when an awesome course only lack a handful of extra signs. It would move the course rating up, at least in my book, and I’d be more apt to spread the word about it. Kudos to the designers and locals that take time to put up signage because it can go a long way.

Give me a course that’s rough around the edges, takes three hours to play and is humbling with water hazards. I’m up for the challenge. I just don’t want to get lost while playing it.

Jenny Cook is a women’s Open-division player based in Illinois. She can be e-mailed at jenny@rattlingchains.com. You can see some of her disc golf photography at her website.