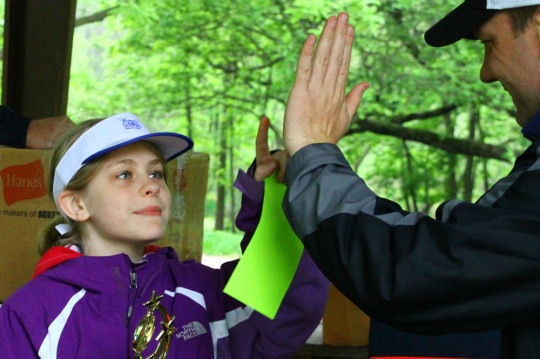 Angelie Hill gets a high-five from her father and tournament director Ray Hill at the JTown Disc Golf WGE on Saturday. (photo by Jenny Cook)

All signs point to the first PDGA Women’s Global Event being a resounding success.

Paige Pierce, who won the 2011 World Championship, earned the overall Open title, according to unofficial results on the PDGA website, as of late Sunday afternoon.

The Daisy Chains Tournament in Watsonville, Calif., which had 52 players, put on its WGE event with a serious woman’s touch. Everything from men acting as scorers, hand sanitizers, candy, daisies all over the course, poker tables, player bags with interesting items and, basically, a fun atmosphere.

Tournament director Christine Hernlund said the tournament had 18 scorekeepers, four men manning the grill, many volunteers and the group used 48 pounds of meat at lunch.

Women from this event placed in the top two in three classes — Open, Advanced Masters and Intermediate.

On the other side of the country, Jennifer DeVries served as a tournament director for the first time at the Disc Chicks Throw Down at New Quarter (Williamsburg, Va.)

“Wow was it an experience that I really enjoyed,” DeVries said.”It was such a great time for everyone involved.”

The field from the Daisy Chains Tournament. (photo contributed by Christine Hernlund)

The tournament had 12 women, with seven playing recreational and five in advanced. On top of that, 23 men played to help support the women.

DeVries said the tournament had a lot of local support and donations and that many people helped with the running of the event.

Forty-one tournaments were held throughout the country and the world.

Sylvia Edwards approaches the basket during the WGE event in Williamsburg, Va. (photo by Kevin Morrow)

Three-time world champion Val Jenkins had the highest-rated individual round with a 1016 first round at the Daisy Chains Tournament. Her second-round 910 gave her a 1926 overall (963 average) to place fourth. Sarah Cunningham, who played in the Southeastern WDGC – WGE in Charlotte, N.C., rounded out the top-five with a 1923 total (956-967) for a 961.5. average.

Sara Santos prepares to putt during the WGE event in Williamsburg, Va. (photo by Kevin Morrow)

If you have any comments, questions, thoughts, ideas or anything else, feel free to e-mail me and the crew at: pj [at] rattlingchains.com. Don’t forget to follow us on Twitter and like us on Facebook!