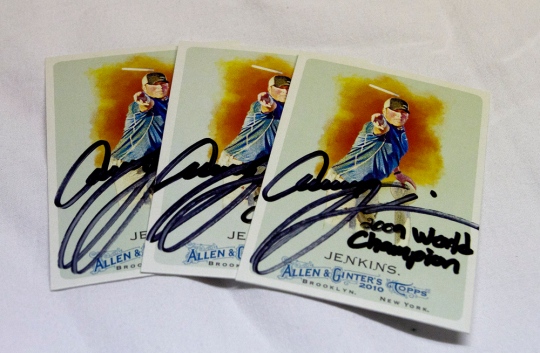 Who is the winner?

Last week, I shared a story about the Avery Jenkins card.

This card played a part in me getting interested in the sport. Though I imagine I would have found the game again without this card — but who knows when?

It’s funny how things like this happen. I’ve since talked to people who have tried to find these cards, only to not be able to get one in a pack. And though the base cards can be found on card collecting sites, there’s still the cool feeling of finding a card you want when you crack a box and few packs.

Some of the cards I’ve pulled from packs over the years (Cole Hamels jersey card; Torii Hunter bat card; Jim Thome jersey card) mean more to me than some of my favorite cards that I’ve had to scrounge through eBay auctions or card shows.

So, yes, it was cool to pull Avery’s card.

And it’s even cooler to give a few of these away knowing some people are going to really enjoy them. Especially that they are autographed. And, another cool point is he signed these for these giveaways.

Anyway, reading the comments on here and on Facebook showed that Avery is, indeed, a great ambassador of the sport and earned his spot on a card.

I know, you are all wanting me to announce some winners. But give me some slack here! I wanted to show a couple of people’s comments from the original story.

That’s a lucky find for you!!!! I only get stale gum when I buy sports cards!

That comment not only made me crack up, but it brought me back to buying packs of cards as a kid on my way to school — and getting that gum! Luckily, no stale gum in the Allen & Ginter packs!

We all collect plastic, it just makes sense for us to collect trading cards as well.

This is an interesting comment because the only plastic I collect are discs from tournaments I play in. But I see so many people collecting and it’s interesting. Then I hear how much some of these discs go for and I have said something along the lines of “Seriously? Why would anyone pay (insert amount) to have a disc they won’t throw?”

Then I remember my card collection. And I bow my head realizing I pay too much for cardboard. So, I get it… I truly do!

Great article! Anytime I see someone get hooked on this game – it validates my addiction!

I fully agree with this! It’s always nice to know other people have these addictions, isn’t it?

This comment is one I agree with so much! There’s cards for many other things besides the big sports — from professional wrestling, to MMA, to soccer, to golf, NASCAR and so much more.

How about some disc golf love?

I’d be all about authentic auto cards, game-used cards (discs, shirts, basket flags, bags, baskets even — so many possibilities!) and would definitely be buying several boxes. Hey Topps, if you are reading… contact me! I’m all about helping out with this project!

I never knew that there were pro golf cards. That’s pretty amazing. I can’t imagine having my winning discs chopped up into little pieces though… that would be hard.

Agreed that it would be hard, but how cool would it be to know that disc is being enjoyed by others throughout the world?

OK, I’m sure you guys enjoyed it as much as I did, but it’s time to get along with the giveaway, eh?

As you remember, the contest was scheduled where we would give away two autographed Avery Jenkins cards.

However, that’s changed. And you’ll note the photo at the top of the page has three cards… not two.

See, the outpouring of likes and comments and tweets was awesome. So I’ve decided we will give away three cards!

I am going to give one to someone who commented on the blog. Another to those who tweeted it. And another to someone who liked it on the Facebook post. So if you entered in more than one way, you actually got better odds!

Somebody can’t, however, win more than one card. Please be honest if you won two and it wasn’t fixed because a Twitter name and one of the others is you. Thanks!

Here are the winners…

For those of you who won, please contact me with your mailing address so I can send you the card. I will also try and send an e-mail/tweet/message. If I don’t hear anything within seven days or so, I’ll re-draw from the group the win came from and give it away to someone else. So get in touch!

If you didn’t win one this time, have no fear — we have a couple more to give away and will do so in the future!

Keep watching for giveaways and contests as I got a box full of goodies today from a company with some discs and other things to give away. And I have a bunch of other things in the prize box. Now it comes down to figuring out some contests and games to do to give this stuff away!

If you have any comments, questions, thoughts, ideas or anything else, feel free to e-mail me and the crew at: pj [at] rattlingchains.com. Don’t forget to follow us on Twitter and like us on Facebook!