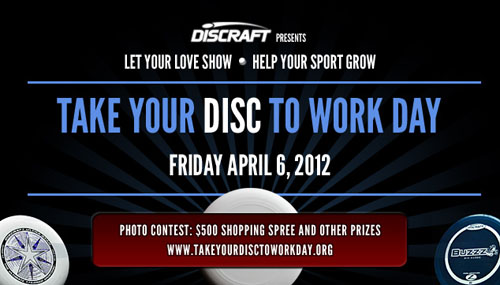 Give yourself a chance to win!

Have you participated in something where you brought something to work for one day?

Something or someone else?

Now you have that chance again. This time to hopefully help spread the word of a sport you play and enjoy.

This Friday — April 6 — Discraft is sponsoring an event called Take Your Disc To Work Day. The idea is simple — take a disc to work or school and get someone interested in a disc sport, be it disc golf, ultimate or something else.

Do it creatively and you could win a spending spree in the Discraft store.

Get creative with your photos and you could win a spending spree! (Photo courtest Discraft)

The idea isn’t just to spread the word of disc golf, but to make it a way to talk about all disc sports.

“It’s a concept we had tried briefly years ago, before my time,” said Brian Sullivan, Discraft’s marketing director. “It’s a concept that’s brilliant. It’s a concept Pete (Chumas) came to us with and said we should take it globally.”

Chumas said he saw the idea as when Ultimate Canada did it the past few years and he thought it could work on a much bigger stage.  A former ultimate player with ties to the disc golf community, Chumas said he wants to keep seeing disc sports grow and maybe appear on television some day.

Ultimate Canada has been running something similar to this and Chumas said he had participated in that event and thought it could go global.

“I have some old friends at Discraft, and they were immediately on board when I pitched them since they had tried something similar way back before social media,” Chumas said. “Now, thanks to (Discraft) we had some prizes and celebrity judges, and could get the word out quickly with the power of social media, so we jumped in with both feet.”

Sullivan said getting involved with this was an easy decision for Discraft.

“We get approached by folks all the time for various projects,” Sullivan said. “We prefer to jump on board the really good ideas with national or global reach. This one was like “Bing!” and we were like that’s sweet and awesome.

“It was very easy for us to give this the green light.”

If you get one person hooked on disc sports, you’ve just doubled your number. If we ALL try to do that together, we could double the ENTIRE POPULATION of disc sports in one day! Spread the word and let’s all take a disc to work or school on Friday, April 6th!

To get to that point, Chumas had to get things going. He said it started with an e-mail to some contacts at the company.

“I’ve known some of those guys for years, so it started with a quick email,” Chumas said. “It’s a lot easier to move mountains when you know the guys who own the heavy equipment.  And I wasn’t asking for a ton, so that probably made it easier to get a yes.”

With the support of a major disc company, the stage was set and things moved forward as a date was set and everything started to build.

Discraft set up some prizes and put together a panel of six judges.

“One of the reasons Pete came to us is because we have connections to all levels of every disc sport,” Sullivan said.

The six members of the judging panel are some of the biggest name in ultimate and in disc golf.

The judging panel will vote on one set of prizes — three shopping sprees at Discraft. The first place one will be worth $500, followed by $300 for second and $200 for third.

Participants can win two others ways — a $500 spree for the Fans Fav and a $250 shopping spree that will be decided by a random draw.

Photos from the day should be entered by posting them on the event’s Facebook page.

If the participation for this event is strong, Sullivan said he could see this becoming a yearly event.

“We’ll see what kind of response we get this first year,” he said. “If we can get a buzz on this globally, who knows how many people will join.”

Chumas said the event could definitely become yearly. For now, though, he said he is looking to see what the disc sports community comes up with.

“I’m most looking forward to laughing out loud at the crazy things people come up with for their photos,” he said. “Disc folks tend to be pretty creative I think, so we’ll see what happens there.  As far as the future, I certainly see it as an annual event, since it will most likely only gain steam as more players become aware of it as an annual day to promote their sport.  And who knows, maybe after a few years we might actually start to get close to truly doubling our numbers.”

UPDATE (April 3, 1:15 p.m.): With Good Friday being this Friday, Sullivan noted in an e-mail that “We are encouraging anyone who isn’t at work or school on Friday to participate on Thursday.”

P.J. Harmer is the lead blogger for Rattling Chains. If you have any comments, questions, thoughts, ideas or anything else, feel free to e-mail me and the crew at: pj [at] rattlingchains.com. Don’t forget to follow us on Twitter and like us on Facebook!