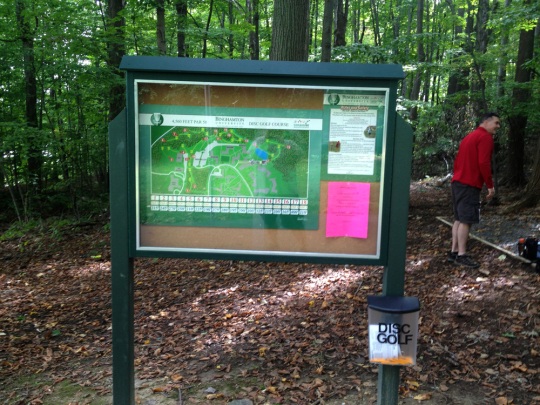 Binghamton University’s new disc golf course has the potential to be top-notch. It also proved to be a crazy welcome back for one disc golfer. (photo by P.J. Harmer)

Do you ever get that feeling where it’s like you are throwing a disc for the first time?

Though I get a small part of that feeling on almost every outing, I really was overwhelmed with it a couple of weekends ago.

It was like I was pulling out plastic for the first time.

It had been more than three months since I had last played the game, so I was excited to meet with two others and play a round. We met at Binghamton University in upstate New York for a round on a new course. This course, which had been open for less than a month, was designed by Dan Doyle, who also worked on the design of the famed Warwick course.

And, I’m sure, many of you may have seen the interview where Ken Climo put Warwick up there as his favorite course in the United States.

So forgive me if I was a little giddy when told by a friend than Doyle was the designer of this course.

Binghamton University is a deceptively large campus. It doesn’t seem like it should be as big as it is, but there is quite a bit of land. This course is spread over the upper part of the campus, going in and out of the woods, some open land and the occasional parking lot.