Much like Irish rock band The Cranberries asked with its 1993 debut album, “Everybody else is doing it, so why can’t we?”

Rattling Chains is proud to announce that it is jumping into the disc manufacturing market, with a line of six discs to be released this Friday, April 5.

Making its own line of discs has been a goal of Rattling Chains since day one, according to founder P.J. Harmer, but it took a bit longer than expected.

Big Kev, a lumberjack from Upstate New York, is set to be the first pro for Rattling Chains.

“This is the culmination of a long and arduous process, but we are thrilled with the results,” Harmer said. “We are confident that our readers, and disc golfers the world over, will feel the same.”

Harmer initially began developing the discs with founding partner Darren Dolezel before the Rattling Chains blog began, he said. But with the market already being flooded with manufacturers, Harmer decided to build the brand name before investing in the plastic.

“As soon as I first picked up a disc, I knew I wanted to improve on the concept,” Harmer said. “Ease of use, grip, accuracy, consistency – all of these qualities are covered with the Rattling Chains line.”

The initial offering of discs will include everything a player needs to build a complete bag:

All of the discs will be available in two grades of plastic at launch — Clay, a base plastic with superb grip and fast wear rate, and Marble, a premium grade that blends enhanced durability with water-wicking technology that leaves the disc constantly dry.

The discs are being molded by a successful plastic injection company that is completely new to the disc golf scene, Dolezel said. However, because the company has produced thousands of other products and has a large capital base, it is able to provide Rattling Chains with high-end plastic at affordable prices.

According to Harmer, the disc names were recently changed from a more basic list (which included S-DD for stable distance driver, OS-MR for overstable midrange, etc.) to the lumberjack theme when he and Dolezel discovered the first Rattling Chains-sponsored player, simply known as Big Kev, during testing.

“We were out in the woods doing some testing in upstate New York,” Harmer said. “Darren cranked one of the Brush Hooks and it skipped off into a clearing of nothing but tree stumps.” 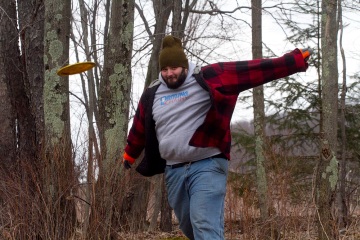 Big Kev took to the game quickly and is easily through more than 600 feet with many drives.

As the partners walked toward the discs, Harmer said, they saw a hulking figure in the distance that they first mistook for a Sasquatch.

“I mean, this thing was big,” Harmer said. “But it turned out it wasn’t a thing. It was just Big Kev, doing his thing.”

That thing was logging, as Kev had been the one to clear the entire field of trees. As Harmer tells it, Kev reached down to pick up Dolezel’s errant disc, and the rest is history.

“We called out for him to throw it back to us,” Harmer said. “We must have been about 250 feet away. I thought he would toss it about half way and save us a few steps.

As luck would have it, Big Kev was a natural. With one flick of his wrist, he sent the Brush Hook S-curving over the heads of Harmer and Dolezel, which left the two disc makers salivating.

“I didn’t really get what the big deal was,” Kev said. “I just gave it a little toss, and then they had this crazy look on their faces. I really just thought they were mad that I lost their Frisbee.”

Harmer and Dolezel knew opportunity was slapping them in the face. They approached the 6’4”, 310-pound lumberjack with trepidation, but ultimately found him to be just a big teddy bear who can huck a disc real far.

“Kev is great, and he’s going to be a great ambassador for the sport,” Harmer said.

Although he had never heard of disc golf until approached by Rattling Chains, Big Kev grew up in the tiny hamlet of Mooers Forks, New York and was a standout athlete at Northeastern Clinton Central in Champlain, lettering in football, hockey, and curling. He was offered a Division I hockey scholarship to nearby Clarkson University, but due to his father’s health matters had to turn it down and take over the family logging business.

He said that he is ready to trade it all for a shot at being a professional disc golfer.

“When I talked to P.J. and Darren, I felt that rush of adrenaline come over me like I used to feel when I got a good shuffle going in curling,” Kev said. “Honestly, it’s been a long time since I felt that, and I want it back.”

Harmer and Dolezel set Kev up with some local pros to dial in his training, and even flew the left-hander out to California for some extra work with Rattling Chains instructional writer Jack Trageser, who is also a lefty.

Trageser, though, admitted that he couldn’t do much with Big Kev.

“I couldn’t believe they sent me this guy for education,” Trageser said. “I mean, here he is, threading 650-foot needles through the trees of DeLaveaga. Backhand, forehand, turnovers, you name it. He just stepped up and did it.

“Honestly,” Trageser admitted, “there is nothing I can teach him. If anything, he is teaching me.” 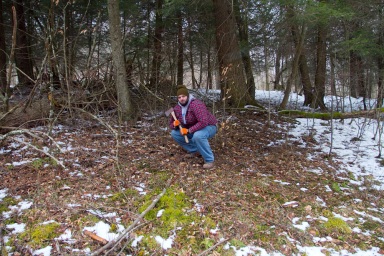 Big Kev is giving up what he knows best — logging — to try and take the disc golf world by storm.

According to Harmer, so many discs were lost from Kev throwing them too far that the GPS technology was required. Discs will be molded with a microscopic GPS unit embedded into the plastic, and players can track their throws by syncing the discs with a mobile application that can be downloaded onto iPhones and Android smartphones.

“We’re actually really excited about this development,” Harmer said. “It is going to bump the prices of discs up just slightly, but we know the disc golf community has been clamoring for a better way to find discs. Now, we have it.”

The first GPS-embedded discs will be the Chainsaw and Log Jack, even if Kev can throw his putter more than 500 feet.

In fact, now that Kev has been using the discs, he gushes about his love for the Dynamite putter.

“Dynamite and I are like peas and carrots,” Kev said. “I love the name, too. Old-time loggers used to use dynamite to blow up dams and float logs down river to the saw mills. Now, I use Dynamite to blow up the chains from 50 feet with ease.”

Big Kev will make his National Tour debut at this month’s “Steady” Ed Memorial Master’s Cup at the same DeLaveaga course he shredded with Trageser late last year. Naturally, he is feeling confident that he’ll walk away the winner.

“It’s going to be just like when our high school team took the state curling title,” Kev said. “Except for this time, instead of the team hoisting me on its shoulders, I’ll be hoisting P.J. and Darren on mine. What they are doing for me with their discs and their support – words can’t express it enough.”

The Rattling Chains line of golf discs will be available this Friday at all online and brick-and-mortar disc golf retailers.

Steve Hill is the associate editor for Rattling Chains. Email him at steve@rattlingchains.com or follow him on Twitter @OneMileMore.